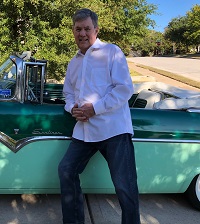 James B. Styles is a native Texan, born in Fort Worth, and he grew up and attended highs school in Beaumont. James has a BA degree from Baylor University in Journalism. Writing has always been an interest of his, which led to a column for his high school newspaper, then composing technical manuals for his first job out of college in the aerospace industry, to now writing novels. James was self-employed for the last seventeen years until he sold his business in 2015 and spent many years prior to that in the automotive industry. James currently lives in Cedar Park with his wife, Ann and he has a daughter and a step-daughter. His family attends a local church regularly, and he has an interest in classic cars and playing golf. He has published two books "Through the Glass Darkly" and "The Loves of A Lifetime" and has completed three more as yet unpublished novels. James served in the Army reserves from 1968 to 1974.