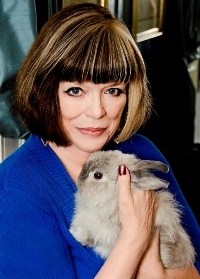 Kay Kendall’s RAINY DAY WOMEN picked up two awards at Killer Nashville 2016—for best mystery AND best book (by an attending author). Kay was a finalist in two categories, and won for both

RAINY DAY WOMEN is the second book in the Austin Starr Mystery series. In 1969, during the week of the Manson murders and Woodstock, the intrepid amateur sleuth, infant in tow, flies across the continent to support a friend suspected of murdering women's liberation activists in Seattle and Vancouver. Then her former CIA trainer warns that an old enemy has contracted a hit on her. Her anxious husband demands that she give up her quest and fly back to him. How much should Austin risk when tracking the killer puts her and her baby's life in danger?

A reformed PR executive who won international awards for her projects, Kay lives in Texas with her Canadian husband, three house rabbits, and spaniel Wills. Terribly allergic to her bunnies, she loves them anyway! Her book titles show she's a Bob Dylan buff too.

She says, "In my mystery series featuring Austin Starr, amateur sleuth, I explore what life was like for a typical young woman--not a headline maker, not a Hanoi Jane or Angela Davis, but a moderate who nonetheless got swept up by history's tides during the turbulent sixties. All that turmoil lends itself to drama, intrigue, and murder

Stairway Press published Kendall's debut mystery, DESOLATION ROW. in 2013, as well as RAINY DAY WOMEN in 2015. DESOLATION ROW was a finalist for best mystery at Killer Nashville 2014. A short story "Strangers on a Plane" launched in 2015 on Kindle. It is part of a collection of 13 Kindle stories called THE PROMETHEAN SAGA.

Kay is a member of the national board of Mystery Writers of America and also president of its Southwest Chapter. Also a member of International Thriller Writers, she is a contributing editor to its online monthly magazine, THE BIG THRILL. Other organizations she belongs to include Crime Writers of Canada, Writers League of Texas, Houston Writers Guild, and the Texas Association of Authors. She earned degrees in Russian history and studied the Russian language in the Soviet Union, which accounts for her being a student of the Cold War and aficionado of Russian culture..