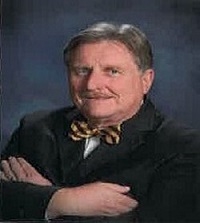 Kenneth Bennight is a husband, father, lawyer, former Marine, and native Texan who lives in San Antonio, Texas. And he's the grandfather of the cutest little boy on the face of the Earth

Kenneth has reduced his law practice and is spending more time writing. Most of his writing is fiction, though he occasionally writes nonfiction, including the legal reference handbook, Texas Law of Streets and Alleys.

Kenneth handled street-related questions when he worked for the San Antonio City Attorney's Office. In preparing to leave, he started to write a series of street-related memos for those who would take over his responsibilities. When the memos started to grow, he decided to write the book instead.

Kenneth and his wife Susan were married June 6, 1970, and reside in San Antonio, Texas. They also own land backing up to the Navidad River in Lavaca County, Texas, which led to the inspiration for "Wild Man of the Navidad."

According to J. Frank Dobie, the legend of a wild man living in the Navidad River bottom land predates the Civil War. One or more escaped slaves may have hidden there. But the legend was too good to let die. Instead, after the war, the legend evolved into stories of a Sasquatch-like creature.