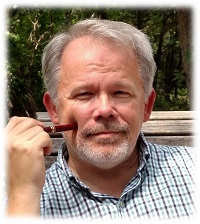 Robert H. Johnson is proud of his Texas heritage and can trace his family tree for more than 120 years of Texas history.

Born to a career Air Force Sargent and his wife on Tinker Air Force Base in Oklahoma, he lived eight of his first 15 years of life in France and Spain. When his father retired from the Air Force, he settled the family in Lindale, Texas.

Robert subsequently graduated from Lindale High School in 1979. He then proceeded to graduate from Tyler Junior College in 1984, then from the University of Texas at Tyler in 1986 with a Bachelor’s Degree in Psychology. In 1990, he received his Master of Education in Counseling from Stephen F. Austin State University in Nacogdoches, Texas.

Over the past 25 years, Robert has worked in the Mental Health field in Texas for a Local Mental Health Authority, in private practice and for the State of Texas. He is a Licensed Professional Counselor and currently resides in rural East Texas with his two cats, Lenny Earl and Maddie, and his dog, George.