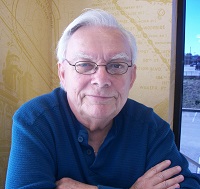 WASN’T THAT A SONG Is a historical romance with a hook at the end written by G Wayne Hacker. Mr. Hacker studied English during his colligate years. Prior to writing WASN’T THAT A SONG, his other works have been a horror thriller titled, THE AZTECA STONE SECOND EDITION, and GAUCHOS, a memoir of his 36 years coaching children's soccer. Since retiring from the communications industry, he has written a bi-weekly column for The Bandera Bulletin, a local weekly newspaper, and a quarterly two-page article for the Heart of Texas magazine. He was also asked to write a human-interest article on a local horse rescue that ran above the fold on the front page of the Boerne Star newspaper.

Today Mr. Hacker lives with his wife Margie, five dogs, and a spoiled horse named Joe in the Texas Hill Country - seven miles from the small town of Bandera – a throwback community to the Old West. Just how small is Bandera? The sign on the city limits shows it to have a population of 957 folks.