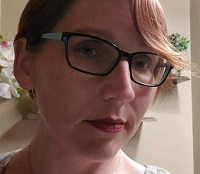 Stephanie C. Marks is the author of the Hidden Gems Saga. She began writing poetry and short stories as early as 1993, then transitioned into academic non-fiction and published several times over a decade. After completing her formal education, in January 2020 she turned back to her first loves, fantasy, and romance.

Her current works in progress are the first three novels in a six-book epic series in different stages of completion. Even though she tries, Stephanie doesn’t know how to take breaks. This results in very little sleeping, and a lot of writing.

Other than losing herself in Neuralia, her favorite pastimes are playing tabletop games with friends and spending time in the ocean. But, until she can figure out how to stop losing dice in the sand, the two hobbies remain independent of one another.

She holds three academic degrees in biology. In the real world, her days are filled with science, and her nights with family. Most of her free moments are spent with her two children and husband who loves and supports her in a way only found in romance novels. .